On Independence Day we went to Tim's aunt's house in Raymore for a huge cookout with his dad's side of the family.  Tim's dad is the oldest of ten kids, so when I say huge I'm not exaggerating.  We left a little early so we could be closer to home for fireworks.  We went to the one in Sugar Creek which is just about 5 minutes from our house.  It was small, but pretty nice - until it started to rain on us... really, rain on the 4th of July???

Summer school ended on July 9th.  The girls are now home all day with a babysitter (the same one who watched them after school since I had to go back to work full time in January).  I hope they don't scare her off before the end of the summer...

On the 10th we left home at 7:00 am and drove to St. Louis for the CHI Reunion.  I left my camera in the car so I don't have any pictures from the actual reunion.  We had a good time meeting some of the other families (Duewels, Bakers, Armstrongs, Willetts - and I know I'm going to forget to mention others we met).  We also saw some of the families that we have known for awhile like the Sinclairs, Bonds, Stottsberrys  and Rimas.  We were especially glad to Meet Julie E. in person!

After the reunion picnic was over, we went to America's Incredible Pizza Co. with our friends from Illinois who are thinking about adopting again (they are now considering Ethiopia instead of Colombia for their adoption due to the long wait time for Colombia) and came as our guests to the reunion.  Our kids had a great time with their daughter.  I actually got a couple of pictures before my camera battery conked out. 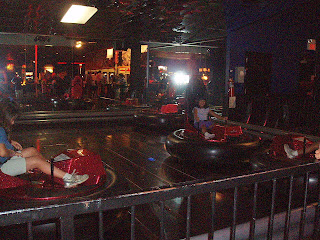 It's kinda dark, but you can see Claudia to the right, Diana to the left and Mayerly's leg to the far right. 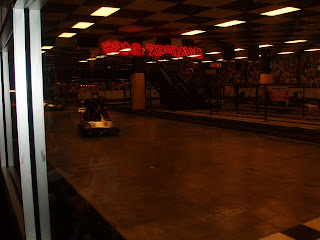 This one is of Oscar on the indoor go-cart track - again kinda dark.
The day after the reunion we went swimming at the hotel pool after breakfast and before we left to go back home. 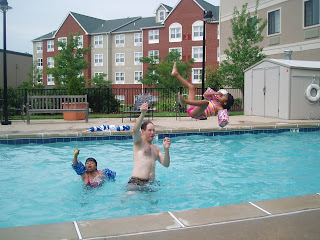 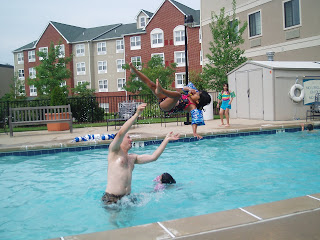 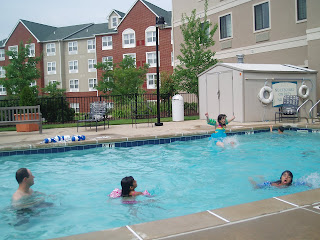 Diana in mid-jump by the poolhouse 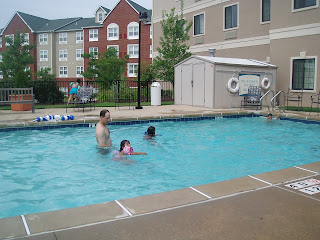 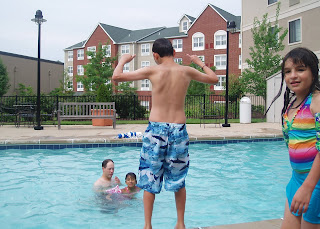 Oscar's back since he wouldn't let me take his picture when he was looking at me... hehe!
At 8:00 Monday morning after we came home, I took Oscar, Diana and Mayerly in for their lingual frenectomies (tongue tie oral surgery).  It wasn't as bad as I expected.  We opted for laughing gas before the shot (don't think any of them even know they got a shot in their tongue...).  The oral surgeon then cut the frenum with a laser.  It wasn't as gross as I figured it would be, I even watched (and I can't usually deal with that kind of stuff very well).  Not much blood because the laser cauterizes as it cuts.  We were out of there by 10:00 after all three surgeries.  Now we have to do tongue exercises after every meal.  Oscar still can't get his tongue out much past his lips because it was stuck to the bottom of his mouth for so long, but he should get there with time and exercise.  Speech therapy is now a weekly thing for these 3 ***update, Oscar and Diana are now doing speech therapy twice a week - so if you are still keeping score, we're up to 9 therapy sessions per week***.
This past Saturday Tim took the kids to an air show in Olathe/Gardner, KS so I could be left in peace to fill out paperwork for the upcoming school year (we're sending them all to private schools this year).  Below are pictures... 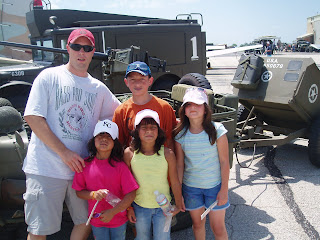 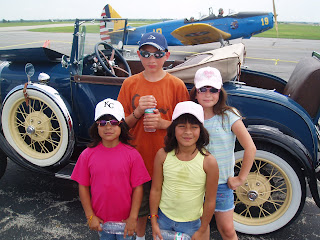 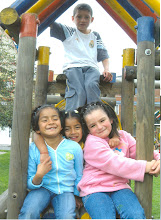 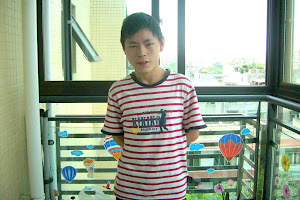